Today Jenny and I hit up Brass Armadillo in Des Moines on the way home from a trip and we got some good finds.

First, we’ve been looking for a good set of depression glass glasses that were a good color at a good price for the last few years and today we finally settled on one.  We’ll probably pick up some martini glasses or some saucers in the future if we find some good ones.

There was also a booth which had more postcards than I had ever seen in one location and they were all categorized by location and/or holiday (but not by year).  If I had to guess, I would say there was something like 10,000 postcards!   Unfortunately for me, the peak of popularity for postcards was around 1900 to 1925 so almost all of them were from those years.  With limited time, I could only look through a tiny fraction of them, but I managed to snag two from 1943.

The first shows the CBS and NBC radio studios in California that opened in 1938 and the back reads:

“I am enjoying my stay here very much.  The weather is so nice and the homes and surroundings are very pretty.  I can’t imagine homes of movie stars being any prettier than some are on this street.  Michael is fine and growing so fast.  And is he frisky!  Can hardly imagine I have been here over a month now.  Love to you and the family.  Mary.”

The second is a picture of the Illini Union at the University of Illinois in my hometown which was completed in 1941 and says:

“Just arrived here in Champaign-Urbana about 1.  Had lunch at this beautiful Union Bldg., have look at and in some of the new buildings.  After visiting Dr. and Mrs. Litman in a short time, we shall return to Chicago this eve.  Beautiful magnolia blossoms here – red-bud just starting.  Love James and Edwin.” 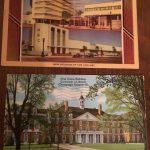 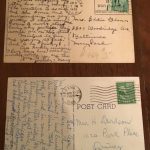 No Comments to “Depression Glass and Postcards”