My favorite radio show is X Minus One which aired from 1955 to 1958.  X Minus One partnered with Astounding Science Fiction (and later Galaxy Science Fiction) magazine to create a radio adaptation of some of the short stories they published each month.  One of my favorite episodes is an adaptation of Robert Heinlein’s short story, Universe which was published in the May 1941 issue.

So on a whim, I searched around to see if I could find that particular issue.  I got discouraged when I saw this issue listed on eBay, the auction had already ended, and the only other place I could find it for sale had it for $125.  Since I didn’t see any winning bidder on eBay, I emailed the seller who said that no one bought it and he would put it back up on eBay for me.

Listen to the X Minus One episode here. 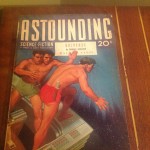 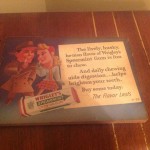 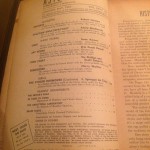 No Comments to “Astounding Science Fiction (May, 1941)”